I’d like to open with a little story, which is also a cautionary tale about making promises.  Somewhere in my happy childhood, I never learned how to swim.  Growing up in a state that only has about 15 days warm enough to swim, this wasn’t a big deal.  Then I went to college in an equally cold state, and missed my university’s swim test requirement by transferring in.  At no point have I been opposed to learning – it’s just never been a feasible option, and I’m beginning to think that there’s an age cutoff after which it’s just not possible to really learn well.  One time in college, a friend (who was not only an experienced lifeguard and swim teacher, but also in Navy ROTC) tried to teach me.  I was moderately successful in kicking my way across the pool with the assistance of a flotation device, but absolutely unable to float on my back or put my head underwater.

Johnny the California-born has always been somewhat incredulous at my ineptitude in water, and once when we were dating, I promised that I’d learn how to swim before we had kids.  *Cue foreshadowing music*

I really thought I was going to get off the hook, given the scarcity (and price) of adult swim lessons, until last week, when I spotted this in the newspaper: 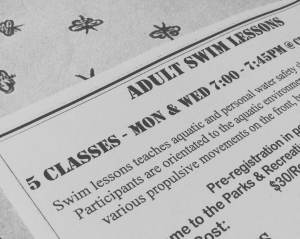 Ten minutes from home, cheap, and at a time that works for me.  I was sunk (and soon, literally will be).  Johnny plans to camp out with a book and/or video camera, the jerk.  Class starts on Monday – updates will come after that.

My last hope for getting out of swimming was pinned on the availability of maternity swimwear.  $30 lessons aren’t much good if I needed a $70 suit, especially considering the very low frequency with which I’ll be wearing it.  Well, thanks a lot, Old Navy.  For under $20, I lucked out with a suit that’s honestly pretty cute.  Sorry, no photos to prove that it looks good.

On the other end of the online-shopping spectrum are these jeans, also from Old Navy, which should just not be worn by anyone besides that mannequin.  In my defense, I only bought them because they were $7, but they are going straight back.  Because…yikes.  Anyone have any better maternity jean suggestions? 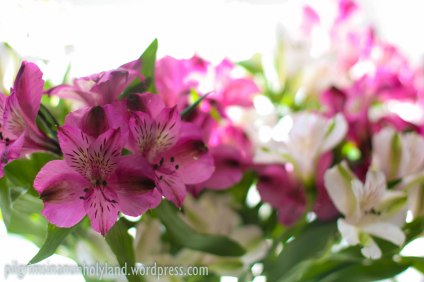 About a month ago, we hosted some friends for dinner.  In my dinner guest-induced neurosis, I decided that flowers for the table were a total necessity (I dunno, to compensate for the fact that I was *only* serving a roast chicken and vegetables, bacon-wrapped asparagus, and apple crisp, all homemade?  It made sense at the time.).

I stepped into the floral section at the nearby semi-upscale grocery store, and picked up two bunches of alstroemeria for $4 each.  Well, that $8 bouquet lived for over three weeks, which is pretty impressive.  I’m now on bouquet #2, which are going strong in the kitchen window, and I can see this becoming a necessary purchase throughout the winter. 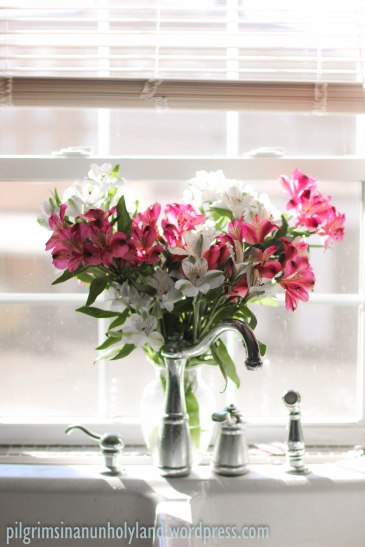 Baby Trailmix and I had a quick 23-week appointment this morning, during which he gave the doctor a well-deserved and solid kick straight to the doppler.  Thanks, kiddo – Mama’s proud.

Until pretty recently, our baby preparations only extended as far as 1) knowing that we’re having a baby, and 2) vaguely making a registry.  Then the family on one side asked us to pick out a crib we’d like, and the other side is throwing a shower and asked about a color scheme.  So I’ve been expanding my ideas beyond the dresser drawer I was planning to use as a bassinet (kidding!  a little), and even made a Pinterest board of color ideas.  “Nursery” is a loose term that in our case means “corner of the guest room, which has white walls that cannot be painted.”  Still, I’m suddenly pretty certain I need this rug to brighten up our bleak midwinter. 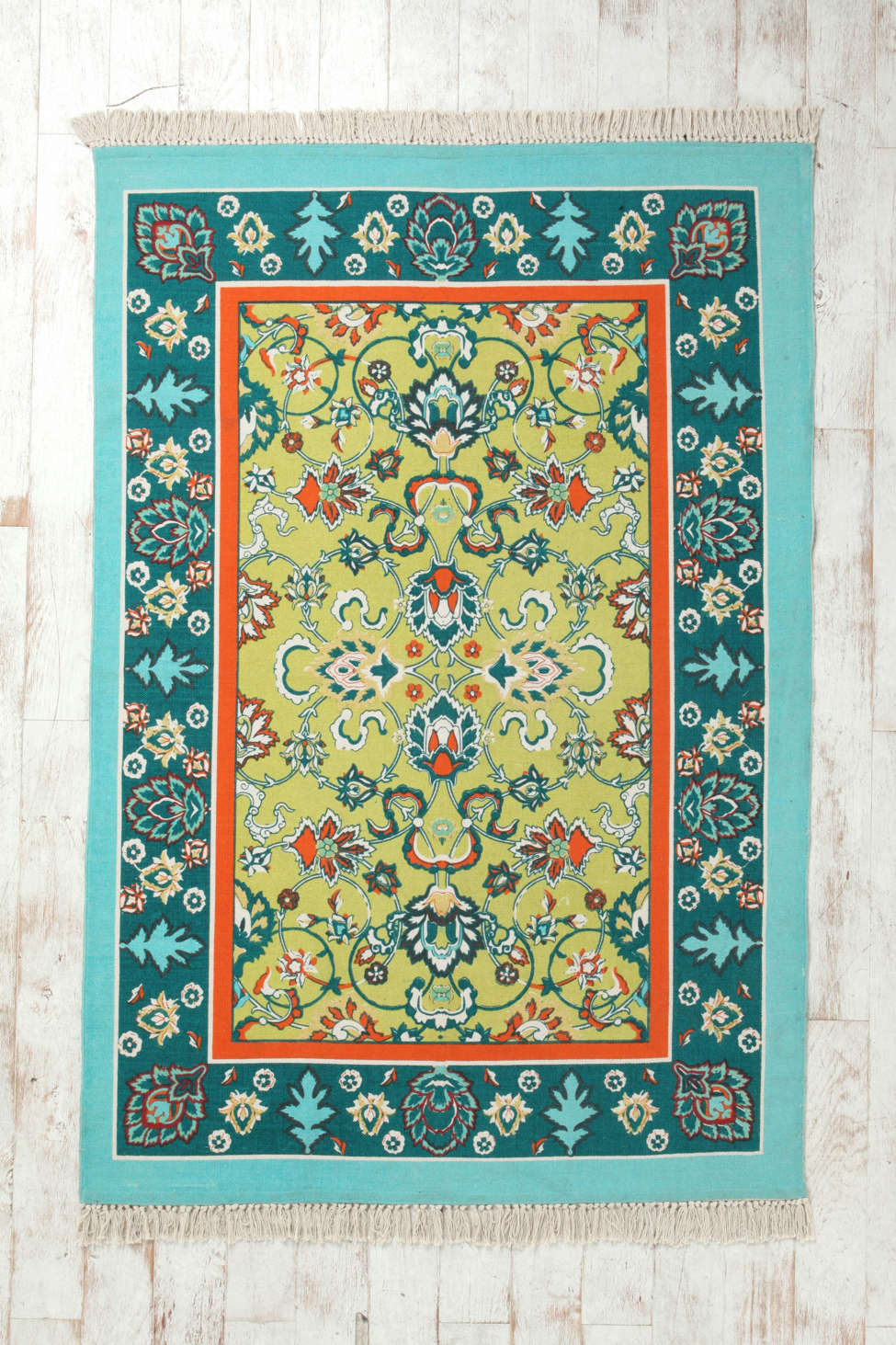 In her quick takes today, Rosie linked to these 1943 Priest Cutouts from Catholic Extension. Rather than waiting till 2017 or whenever Trailmix is ready for this, I think it’s time for me to break out some scissors and a box of crayons (or some colored pencils, if I wanted to get fancy).

I’ll end on a super-exciting topic: What I Found at Costco Yesterday!

Need a new coffee mug?  I did, after I left mine in a choir loft 45 minutes away last weekend (long story).  Costco to the rescue.  So far, it insulates really really well and seems totally leak-proof (even in the hands of a determined child, I’d guess – there are multiple safeguards on it).  Bonus: it comes in a 2-pack, so I can lose another one!

In the clothing section, I spotted a reprise from last winter: the best tights ever.  I can’t find a Costco link, but they come in a 2-pack and are waaaaay cheaper than the link above.  I got some last year, wore them a few times a week, and they still look like new.  They’re also not kidding about the “super opaque” thing.  In short, I highly recommend them, and I’m bummed that the control top will not play nice with my figure right now.

I also bought approximately seven pounds of Multigrain Cheerios, but that’s just because I was there at dinnertime and the baby wanted them.

On that note, I’m out – have a good weekend!  Go Irish, Beat Seminoles! 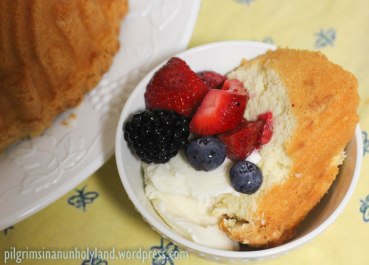 There’s probably an adage about how unwise it is to make recipes for the first time when you have guests, and how you’d have to be a total idiot to do it when your mother-in-law is coming over for the first time.  Throwing caution to the wind, I decided to make my debut pound cake last month, and naturally, left zero buffer time for catastrophe.  I was the last one to the restaurant for dinner because I was waiting for the cake to be cool enough to turn out of the pan.  As you might imagine, this brought the usual will-it-break-in-half nerves to a whole new level (I’m guessing the pregnancy hormones didn’t really help either).  Luckily, my slavish recipe following paid off, and it turned out beautifully.  Thanks to the incredible amount of dairy fat in this cake, it stayed moist for days and days, which is a definite plus when there’s only two people to eat the leftovers.

Adjust the oven rack to middle position and preheat oven to 300F.  Grease and flour a 12 cup bundt pan (I used this one, which Caitlyn gave me several years ago.  It’s an awesome thing.).  Combine flour and salt in a bowl.  Whisk eggs, yolks, milk and vanilla in a 2 cup liquid measuring cup.

Using a stand mixer fitted with a paddle, beat sugar, butter, and cream cheese on medium high until pale and fluffy, about 3 minutes.  Reduce the speed to low and very slowly add the egg mixture until incorporated (batter may look a bit curdled).  Add flour mixture in 3 additions, scraping down the bowl as needed.  Give the batter a final stir by hand.

Scrape the batter into the prepared pan and gently tap it on the counter to release any air bubbles.  Bake until a toothpick inserted in the center comes out clean, about 80 to 90 minutes.  Rotate the pan halfway in the baking time.  Cool the pan on a wire rack for 15 minutes (longer, and it may stick to the pan).  Remove the cake from the pan and let cool completely, about 2 hours.  The cake can be wrapped with plastic and held at room temperature for up to a week (but, you know, it’s a little moister before that).

Oh hey there, 4 month blog break.  It certainly hasn’t been for lack of content, but we’ve been in a 4-month survival period from which we’re slowly emerging.  We took an un-blogged-about trip to Rochester NY for a wedding, where we found out about this little interloper: 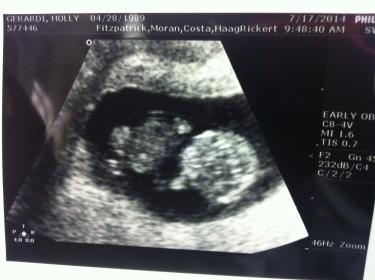 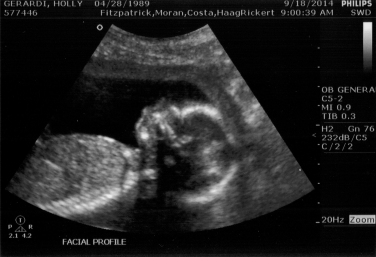 And thus began the Lost Summer of going to work, coming home, melting into the couch, and never doing the dishes (Johnny does it, but I’m only just getting back into the groove of sometimes cooking dinner, eating it, and cleaning up after).  At this point, Baby Trailmix is kicking like a champ, Daddy is keeping house like it’s his job, and Mama is delighted to be at the point where chocolate sounds good again.

We did manage to do some fun things this summer, including trips to Montreal, Maine, Boston, and Minnesota, and photos from those trips may just get posted at some point.  In the meantime, I’ve got some other posts brewing –  a few killer recipes we’ve made, and a story about how our recent trip to Pottery Barn turned into an unexpected ordeal.  I’ve also been Instagramming more often than blogging, so hop over there if you want more frequent little snapshots.

Finally, at Mom’s request, a photo of what I wore Sunday, complete with 22 week baby.  I promise I’ve been taking other photos as we go along, but we’re really only getting to the noteworthy bump now.  Yesterday marked the first time a relative stranger (our parish’s pro-life coordinator, in this case, so I guess it’s okay) asked if I was pregnant. 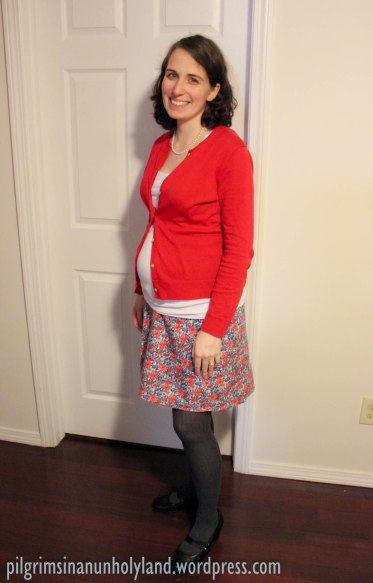 Sweater: Lands End, pretty old and holding up like a champ

Skirt: Made by me! (fabric from our local huge fabric store, pattern here) This project also deserves its own post.  Time to start working through that drafts folder…

Shoes: Clark’s, found cheap on Amazon.  Counting on these to carry my balance-challenged self through the icy winter. 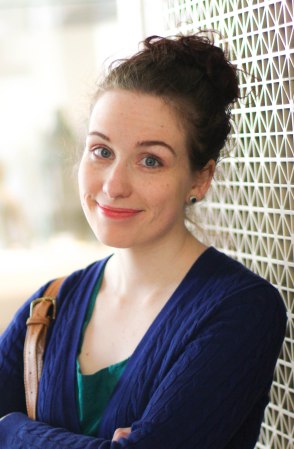 Welcome! I'm a Catholic newlywed, Midwesterner at heart and New Englander by transplant, who blogs about taking pictures, cooking food, and whatever adventures come up along the way.

About me
My Photos
The Recipe Box

"Right is right even if nobody is right, and wrong is wrong if everybody is wrong." ~ Fulton Sheen 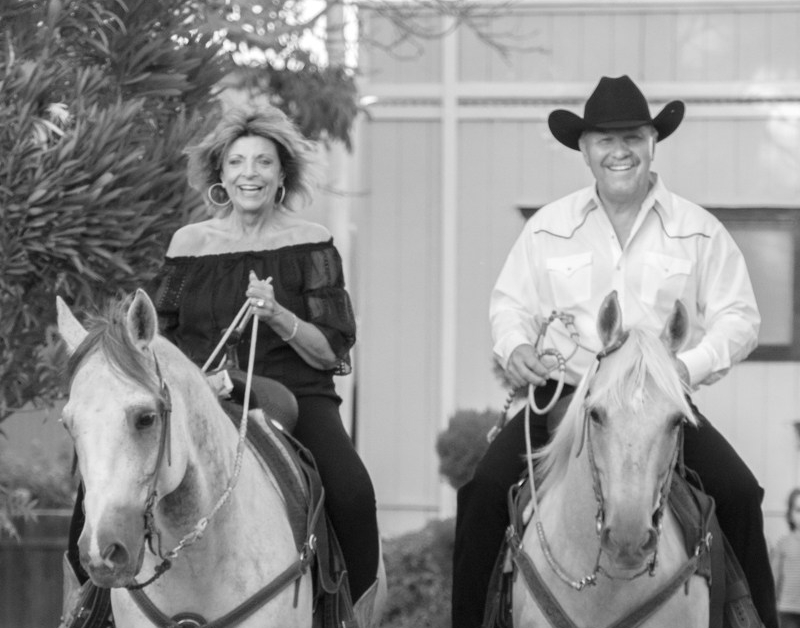 I usually pride myself on being able to easily choose the top five or ten photos to share from an event, but there are just too many great memories from the country-western birthday party I shot last week!  From the hosts’ surprise horseback entrance to the world-class band that kept everyone on the dance floor […]

Baby Photos (and what I’ve been up to)!

After my marathon of photo sessions in November 2014, I took a little break to get ready for and spend time with our first baby, who was born in February 2015.  As it turned out, that little maternity leave turned into an unexpected (but welcome!) cross-country move, followed by Baby #2. The great thing about […]

It’s always fun to photograph returning customers – I love seeing how everyone has changed in a year, and we have a great rapport already built up.  I was delighted to have another session with the Newman extended family for the second year running.  The kids were another year older, the adults another year wiser, and […]

People I know:
Cedars and Tiny Flowers
Harvesting Home
Little House in Chicago
Someone Who Doesn't Feel Like Cake Anymore
The Pious Sodality of Church Ladies